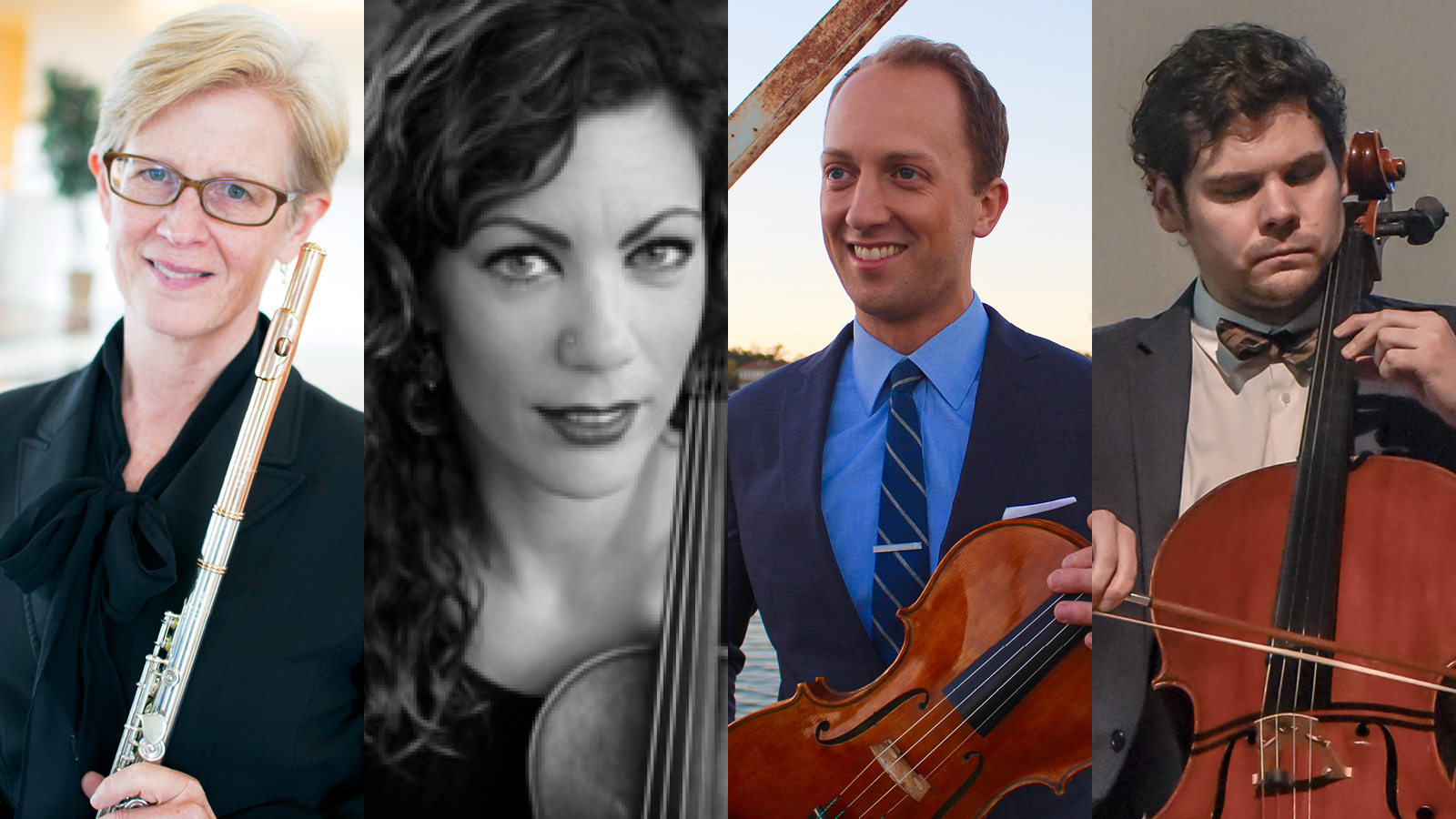 Debra Wendells Cross, flute, has held the position of Principal Flute in the Virginia Symphony since 1980, and presently serves on the faculty of Old Dominion University. She has participated in many music festivals including Tanglewood, Colorado Philharmonic, Music Academy of the West, Skaneateles Festival and the Virginia Arts Festival  Ms. Cross has been regularly featured on NPR's Performance Today, and was a founding member of The Virginia Chamber Players, a chamber music group that specialized in recording the works of American composers. The Seattle native graduated with honors from the New England Conservatory of Music in Boston, where she studied with Boston Symphony member James Pappoutsakis. From there she went on to study with Michel Debost in Paris, France under the auspices of the Harriet Hale Woolley Scholarship.

Elizabeth Vonderheide, violin, now in her fifteenth season as Assistant Principal Second Violin with the Virginia Symphony, has distinguished herself as an orchestral, chamber, and solo musician. She has performed as a member of festival orchestras in Spoleto, Italy; Graz, Austria; Santo Domingo, Dominican Republic; Crested Butte, Breckenridge and Boulder, Colorado. She currently holds a violin position at the Wintergreen Summer Music Festival in Wintergreen, Virginia. Since 2008 she he has also performed as a substitute with the St. Louis Symphony, highlights including their two month opera season, their Carnegie Hall tour, and a tour with American Ballet Theater. She has twice toured Japan as a member of the Hollywood Festival Orchestra, each time playing 15 concerts in 15 different cities across the country. As a chamber musician, Elizabeth has been heard on NPR’s Performance Today, and live on Souncheck with John Schaeffer on New York’s WNYC FM. Locally she has performed on the Feldman Chamber Music Series, The Organ Swell recital series, and as a guest recitalist at Old Dominion University. She is a founding member of The New Commonwealth Quartet, which has twice been featured at Virginia Arts Festival Funhouse Fest, and appears on the latest album by Bruce Hornsby. She is also an original member of the Surf and Sounds Chamber Music Festival in the Outer Banks of North Carolina, presented by the Bryan Cultural Series. Elizabeth holds degrees from the Indiana University Jacobs School of Music and the Manhattan School of Music in New York. She performs on a violin by Joseph Curtin.

Luke Fleming, viola Praised by The Philadelphia Inquirer for his “glowing refinement,” violist Luke Fleming's performances have been described by The Strad as “confident and expressive...playing with uncanny precision," and lauded by Gramophone for their "superlative technical and artistic execution.” Festival appearances include the Marlboro Music School and Festival, the Steans Institute at Ravinia, Perlman Music Program, the Norfolk and Great Lakes Chamber Music Festivals, the Melbourne Festival, Bravo!Vail, and Festival Mozaic. Formerly the violist of the internationally acclaimed Attacca Quartet, he has served as Artist-in-Residence for the Metropolitan Museum of Art and received the National Federation of Music Clubs Centennial Chamber Music Award. He was awarded First Prize at the Osaka International Chamber Music Competition and top prizes at the Melbourne International Chamber Music Competition.

In 2015, Mr. Fleming became the Founding Artistic Director of both the Manhattan Chamber Players, a New York-based chamber music collective, and the Crescent City Chamber Music Festival. He is also a founding member of the Delaware-based Serafin Ensemble. He has performed as a guest artist with the Escher, Pacifica, Serafin, and Solera String Quartets, the Eroica, Lysander, and Gryphon Piano Trios, the Chamber Music Society of Lincoln Center, Decoda, Ensemble Connect, Sejong Soloists, the Orchestra of St. Luke’s, and the New York Classical Players, and has given masterclasses at UCLA, Louisiana State University, Ithaca College, Columbus State University, Syracuse University, Melbourne University, and the New Orleans Center for Creative Arts, among others. Mr. Fleming has served on the faculties of the Innsbrook Institute, Renova Music Festival, Festival del Lago, and Houston ChamberFest, and Fei Tian College and is Lecturer-in-Residence for the concert series Project: Music Heals Us.

New Orleans-based cellist Jacob Fowler is the Founding Director of the Surf and Sounds Chamber Music Series (Outer Banks, North Carolina), and frequently performs with the Houston and San Antonio Symphonies. He is also a Festival Artist at the Crescent City Chamber Music Festival in New Orleans, where he has performed with members of the Manhattan Chamber Players, Dover and Escher Quartets and the Lysander Trio since the festival’s founding in 2016.

March of 2019, Mr. Fowler was a featured artist at the SXSW Festival performing in the HBO/Games of Thrones and American Red Cross production Bleed for the Throne, which received national coverage. Mr. Fowler can also be heard on the 2019 soundtrack recording of the Alley Theater production Constellations.

Mr. Fowler is a former tenured member of the Virginia Symphony Orchestra and former Principal Cellist of the Shen Yun Performing Arts Orchestra, with which he travelled throughout North America, Europe, and Asia. Along with these appointments, he was an adjunct cello professor at Virginia Wesleyan College, the Fei Tian Academy and Fei Tian College. Mr. Fowler has toured throughout China as a Principal Cellist of the Manhattan Symphonie.

In Virginia, Mr. Fowler was a regular performer with the Norfolk Chamber Consort and the Hampton Roads Chamber Players, was a founding member of the New Commonwealth String Quartet. He performs regularly at Bargemusic in Brooklyn and has been a Festival Artist at the Festival de Febrero in Ajijic, Mexico.

In November of 2014, Mr. Fowler collaborated with Todd Rosenlieb Dance Company to perform the Suite for Solo Cello by Gaspar Cassadó with choreography by Ricardo Melendez, which opened with great success and was hailed by M.D. Ridge of Norfolk's WHRO as "the pièce de résistance. [Mr. Fowler] sang sweetly...and the result was spectacular."